Hood Extinguishing systems are designed with preliminary engineering calculations and installed in kitchens.

The technical information in the manufacturer's manual should be taken into account when setting up the extinguishing system. The pipe diameters and lengths to be used in the system and the number and types of joining parts to be used are limited. It is known that systems without these restrictions will not perform as required and will not extinguish the fire. It is necessary to obtain and archive the hydraulic calculation form from the authorized service that installed the extinguishing system. It should be known that systems without limitations are not safe. 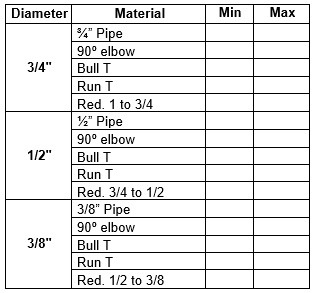 Stainless steel pipes should be used in the extinguishing system. Kitchens are places where there is intense water vapor, oil vapor and salt vapor. In almost 24-hour kitchens the atmospheric environment is susceptible to corrosion. As a result of using different types of pipes, the pipes rust and prevent the system from working.

Cooker hood can be considered the most important component of the extinguishing system. Nozzles are produced according to the types of cooking devices under the hood.

Criteria determining the types of nozzles;

Spray Angle; It is the angle of the liquid sprayed from the nozzles.

Spraying Flow; It is the amount of liquid taken from a nozzle every 1 minute. (Number of streams)

Droplet size; They are droplets formed by the liquid coming out of the nozzle by breaking up at the micron level.

Spray distance; It is the longest distance reached by the extinguishing liquid sprayed from the nozzle.

As the nozzles are positioned on the cooking appliances, they are constantly exposed to oil and water vapor. This may cause the nozzles to clog. For this reason, there is an oil protection cover or foil at the ends of the nozzles. With the operation of the system, the oil cover is dislodged (if the foil is used, it tears) and allows the extinguishing liquid to be sprayed.

There are strainers / filters so that particles coming from the pipes do not clog the nozzles or block the flow. These strainers / filters may rust over time and become unable to function. Or a large number of particles in the pipe can clog the strainer / filter. For this reason, non-clog nozzles have been developed in today's technology. Therefore, there is no strainer / filter in the nozzle. Non-clogging nozzles have been used in Defender Hood Extinguishing systems for many years.

Hood extinguishing systems can be considered as one of the most important components. The most important factor in fire fighting is early intervention. Therefore, the type of detector to be chosen is extremely important. Detectors are categorized in 2 groups.

It is obtained by combining the surfaces of 2 brass plates with special forms with special alloy solders. This type of detectors work according to the technique of breaking at certain temperatures under a certain pulling force. 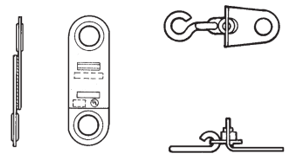 The disadvantage of this type of detectors is that they will be subject to metal fatigue, so they must be replaced in the periods specified by the manufacturer.

It has a different operating principle from fusible detectors. It works on the principle that a special chemical contained in glass bulbs expands at certain temperatures, causing the glass bulb to explode and release the mechanism to which it is attached. The advantages of this type of detector are that it has a wide operating temperature range and also Standard response or Rapid response models. In high risk areas rapid response models should be selected.

Electricity and gas are generally used as fuel in industrial kitchens. It is very important to turn off the fuel supply in the event of a fire. For this, hood extinguishing systems must have a Gas shut-off valve and an Energy cut-off switch.

Gas Shut-Off Valve: Mechanical Gas Shut-off Valve is used to cut off the gas flow. This component is achieved by transmitting the mechanical movement created by the activation of the extinguishing system mechanism to the gas valve and closing the valve. 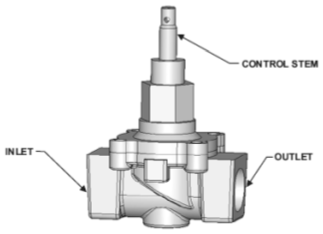 In the event of a fire, turning off the cooking devices and hood ventilation fan is the most important action. For this, there is a micro switch inside the hood extinguishing system mechanism. With the movement of the mechanism, it provides the interruption of electrical energy by changing the micro switch contacts. 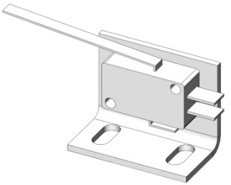